GBA Architectural Products + Services had a very exciting 2019 as we worked on many exciting architectural projects, bringing new life to buildings with the addition of glass block and structural glass. We had the privilege of working with some of the best architects and contractors in the world. All of the projects we participated in were exciting and complex challenges that left us with a rewarding feeling when completed.

We’re going to share a sample of some of those projects. While we have an exciting 2020 planned, these projects were a dynamic way of closing off 2019. Here’s to an exciting decade ahead. 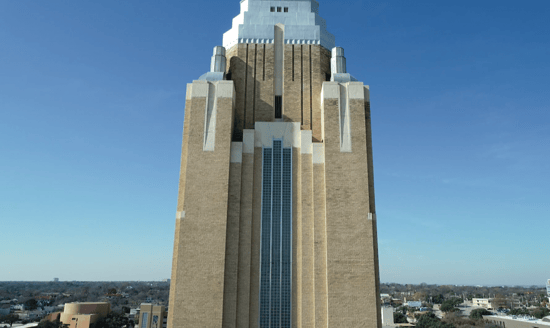 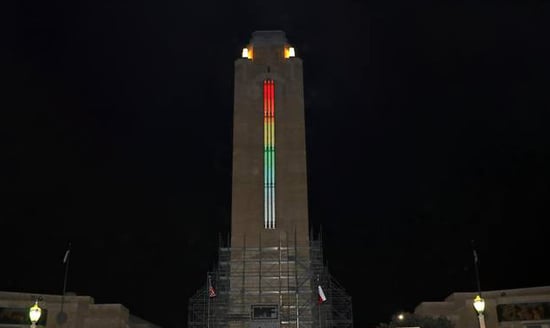 In the hot summer heat, our crew went to Fort Worth, Texas to participate in the restoration of the Pioneer Tower.  The tower stands 208 feet high and peers over the city on all four sides.

Built in 1936, the structure utilized glass block on all four sides of the building, giving the building an Art Deco beauty and charm to their skyline. In the late 1970s, aluminum grates were installed to cover the worn-out grids of glass block.

Everything changed when it was decided to renovate the building. “Part of this was finding a glass block solution that visually represented what was present in the original 1930s construction but used new technology and design methods,” said Debbie Fulwiler, AIA – President of Elements of Architecture, Inc.

Pioneer Tower was restored with over 6,000 pieces of 6” x 6” x 4” Argus pattern glass block. GBA worked with Muckleroy & Falls under the direction of Elements of Architecture, Inc., to assist in the design making sure the owners’ vision became reality.

In addition to the new glass block, LED lighting was added to the interior, affording the option to bring lighting to the night sky. On November 6, 2019 the community held a Relighting Ceremony, which lit up the building for the first time in decades.

“We are happy to have helped recreate the majesty of the monument and let the tower shine again!” 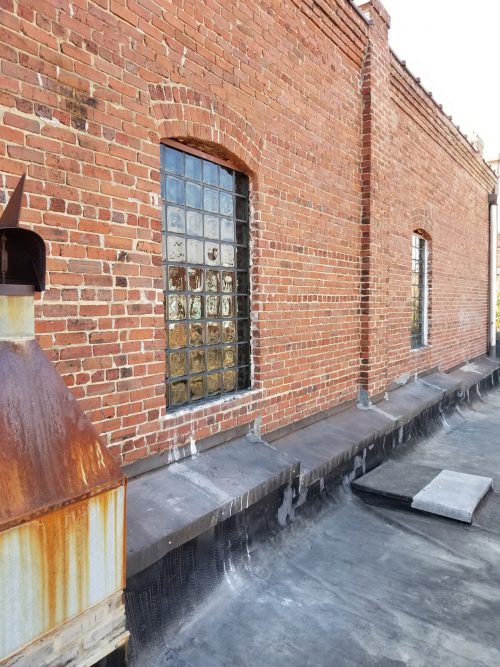 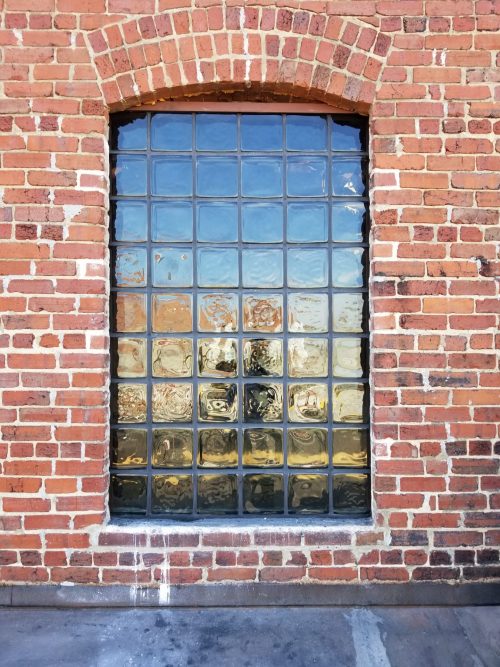 52 Broadway is a historical building located in Asheville, NC. This three-story building, built in 1923, had seen several different businesses over the years, including a car dealership as well as various retail shops. 52 Broadway eventually became abandoned, until downtown Asheville started to revitalize in the 1990s. The building was renovated for Momentum Gallery, an upcoming gallery that is expanding into the space, as well as new apartments in the upper levels.

Located on a zero-lot line, 52 Broadway required the use of fire-rated windows. 8” x 8” x 3” solid Vistabrik® were used not just for its fire-resistance, but for its durability and beautiful look. 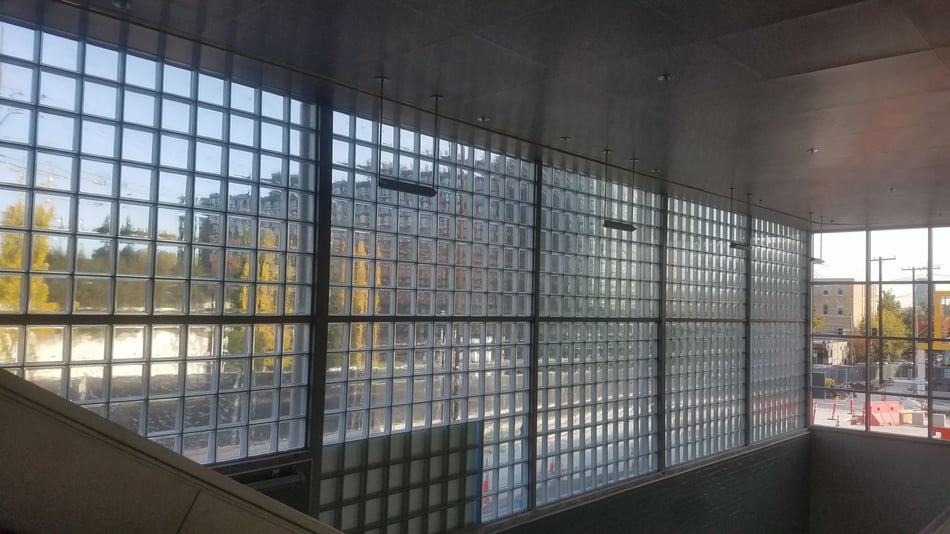 Since 2003, the Link Light Rail Transit System has operated in the Seattle Metro area. With the immense increase in population over the past few decades, the rail system has provided a beneficial source of transportation to the region while decreasing congestion on the roadways.

The Roosevelt Station was announced as one of the new extensions for the railway system, and is set to open for operation in 2021. We were honored to be selected to work on the development of the transit station.  We worked with Keystone Masonry Inc., under the steady supervision of Hoffman Construction Company.

12” x 12” x 4” Clarity pattern glass block were used to build the enclosure. The walls offer riders going up the escalators a great view of the outdoors, while also affording the opportunity to enjoy natural daylight. 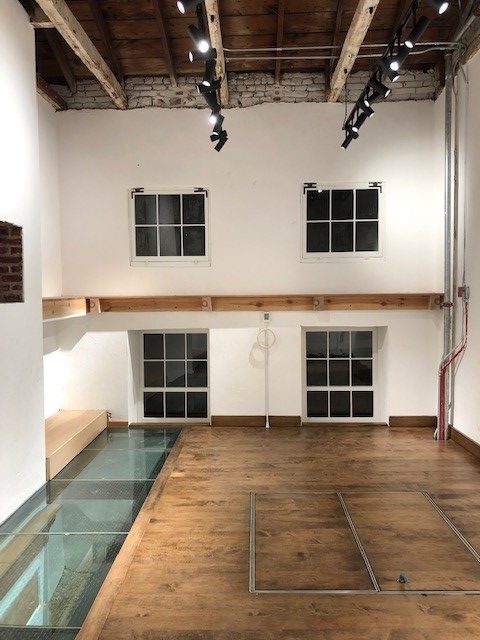 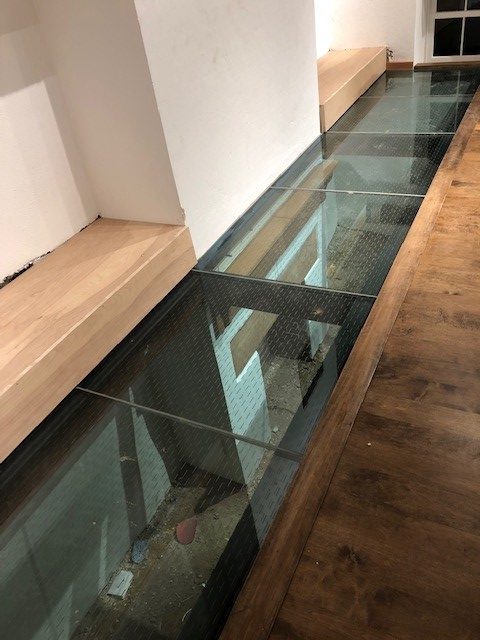 We participated in the rehabilitation of the Arlington House. This was the former home of General Robert E. Lee, and it is now a part of the property where Arlington National Cemetery is today. At the time it allowed the best view of the new national capital emerging in the city; today Arlington House prominently faces the Lincoln Memorial.

Made possible by a generous $12 Million donation by philanthropist, David M. Rubenstein, the memorial honors General Lee’s contributions in promoting peace after the Civil War. While many national monuments have a simple positive message, The Arlington House is complex.  The house doesn’t just celebrate blindly, but also exposes the complicated parts of American history. It brings up the debate between slavery and freedom, as well as loyalty and citizenship.

We installed a GlassWalk Floor System into the floors of the building. The glass panels help showcase how the barracks in the lower level looked during the 1800s. The GlassWalk floor creates more light in areas of the home that were not well lit, while giving visitors a new viewpoint. While the GlassWalk floor adds a new design element that would not have been used in the 1800s, the integrity of the classic design remains.

When people think of the manufacturing industry that built this country, one of the first cities people will think of is Youngstown, Ohio. The city is one of the most vital parts of the rust belt, and the people who live there exemplify the term blue collar.

It is not a surprise that the city is the home of the Historical Center of Industry and Labor.  The museum educates visitors while honoring the history of the steel industry.  It was the steel industry that took over Youngstown during much of the 20th century.  The museum goes through the timeline of the region’s history with manufacturing: from its economic development with black coal, to their redevelopment of the steel factories.

We participated in the restoration of the octagon-shaped stairwell that was built with glass block in the 1980s. The structure has a classic feel, as does the entire museum, which even includes smokestacks to resemble a steel mill.

The stairwell used 12” x 12” x 4” and 8” x 8” x 4” Nubio pattern glass block. The renovation of the damaged glass block and the sealing of all existing mortar joints will preserve the structure for many decades.

As you can tell from these projects, we had a very successful and exciting 2019. We look forward to the new challenges and projects that the new year will bring us!

If you have a project, we’d love to discuss it with you. Fill out our CONTACT FORM, and we’ll help with your plan and offer any samples needed.

GBA Architectural Products + Services has been assisting Architects, Engineers, and Designers for 35 years. From your initial design concept, through CD’s and the finished installation: we can assist you at every step. Whether you require samples, specifications, design assistance, or a plan review – We are an email or phone call away.

Our phone numbers to reach our GBA experts are: