This Pennsylvania transit station was originally opened to passenger service as part of the Market Street Subway in 1908.  The station was superficially updated in 1974 in preparing for the Bicentennial celebrations.  Since then, plans have been underway for some time for a major enhancement of the station. With the guidance, expertise, and vision of Burns Engineering, Converse Winkler Architects and Southeastern Pennsylvania Transportation Authority (SEPTA), the SEPTA 5th Street/Independence Hall will be reopening soon.

The design goal was an open, well-lit, and consumer friendly station.  A.P. Construction, founded in 1954, was selected to build the station and has been serving the Delaware Valley area for over 65 years.  One of the products picked to fulfill the "well-lit" goal, was light penetrating sidewalk panels creating an open, safe, and bright atmosphere in the subway below.  GBA Architectural Products + Services won the bid and proceeded to develop the glass and concrete sidewalk skylights into precast units.  The idea was to build them off site and swing them into place with a crane.

GBA not only supplied, but also installed the 12 precast concrete panels.  Each panel weighed as much as seven tons.  They had to be set on cast-in-place concrete bulkheads, attaining the needed elevation and pitch to seamlessly mesh into the surrounding cityscape.  Pitch of the panels was critical to prevent ponding on the city sidewalks.  Great attention had to be paid to how the panels were integrated into an area so significant to the birth of our country.  Millions of visitors flood the area every year to see the Independence National Historic Park surrounding the station.

"We now have a modern hub for travel, to and from Americas' birthplace."   Now SEPTA can point to the magnificent 5th Street Independence Hall Station sitting within America's most historic square mile. 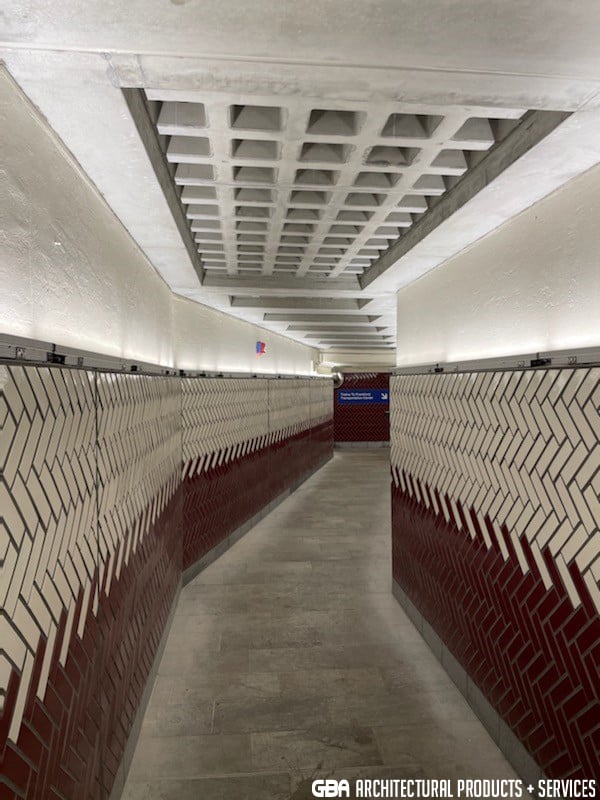